It’s a question facing all long-term expats in Spain – should you take Spanish nationality? And it seems to have become more topical recently – Facebook posts are full of British expats asking themselves if it’s worth becoming Spanish given the uncertainty over whether the UK will remain part of the EU. 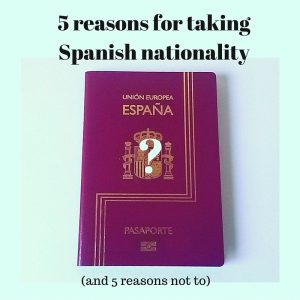 Spanish bureaucracy is notoriously fussy and time-consuming. It has admittedly improved over the last couple of decades but becoming Spanish and having a Spanish ID card complete with microchip suddenly makes things that much easier. Filing taxes online, checking social security details, seeing how many points I’ve got on my driving licence… all can be done quickly and easily via my own pc.

And the size of the Spanish ID card is handy – just like a credit card but more durable. Spanish nationality means no more tatty bits of residence permit papers or flimsy NIE cards.

This is admittedly only an advantage in the EU but I really like travelling with just my ID card rather than a passport. It’s smaller and easier to carry, and there’s no fumbling over passport pages when you’re showing your boarding pass to get on the plane.

An unexpected advantage this but definitely a real plus. Spanish nationality documents (ID card and passport) need renewal every 10 years. But all you do is book an appointment at your nearest National Police station (and the online booking service works really well), go along and your documents are renewed in a few minutes. And it’s cheap – €10.60 for an ID card and €26.02 for a passport (not sure why the extra 2 cents there).

One of the disadvantages of being an expat is that you’re often on the periphery and it can be difficult to take a full part in the life of your chosen country. I think there’s a sort of temporary status to being an expat and a way of making your status more permanent is to go truly native. I certainly feel more part of Spain now that I have Spanish ID, although there are of course things about life here that I will never quite get or agree with. But maybe that’s because you’re always an expat?

And I think there’s more justification in complaining about life in Spain if you’re Spanish. Spanish nationality sort of gives you a legitimate excuse!

Expats often find themselves in a voting limbo. This is especially true of those British expats in Spain who have been living here for more than 15 years – they can’t vote in the EU referendum. Nor can they vote in Spain other than in local elections.

This all changes with Spanish nationality and you get a real chance to decide with a vote in all elections in the country. The down side to this is that as a Spanish national you can be called for electoral duty – this involves spending the entire Sunday at the voting station and staying for hours afterwards while you count the votes. I’ve been there and done that, and have my fingers permanently crossed that I’m not called again.

Reasons for not taking Spanish nationality

Taking Spanish nationality used to involve an interview at the police station with one of the officers who would choose (seemingly) random questions to ask you and then decide if you were fit to become a Spaniard. That has recently changed and new applicants now have to sit a formal exam with 25 questions on many different aspects of Spanish life. And some of them are challenging (plus they’re all in Spanish – obviously).

How many would you get right? Find out here in last year’s exam.

Spanish nationality involves finger printing – your prints go on to police records – and of course getting a number. If you don’t like the idea of ‘being on file’ then this isn’t for you.

Or feel you aren’t ready to. Getting Spanish nationality means giving up your own nationality unless you’re from Latin America (except Brazil), the Philippines and (rather incongruously) Andorra. I don’t think you’re required to hand in your old passport when you become Spanish – I wasn’t asked for my British passport – but in theory, you’re not allowed double nationality.

Of course you don’t have to suddenly start talking loudly and quickly, keep your children up until the wee hours, gesticulate wildly when you’re talking or embrace life to its absolute fullest. But if you do take Spanish nationality there is an element of having to ‘play the part’ so if you’re not prepared to go some of the way towards being a true native, this isn’t for you.

In true Spanish style, becoming a Spaniard involves plenty of paperwork and a good dose of patience. To give you an idea of what’s involved, check out this list of required documents. You also need to pay €100 so it isn’t a cheap process either.

PS I took Spanish nationality over 15 years ago. My main reason for taking it was that I felt I was in Spain to stay and wanted to ‘join’ my husband and daughters who are all Spanish. I haven’t regretted my decision ever.