Truly getting off the beaten track in Malaga is not easy. Hardly surprising when the province is home to a population of 1.6 million and the Costa del Sol. But just occasionally you can find yourself in the absolute middle of nowhere. Bobastro near Ardales is one of those places. 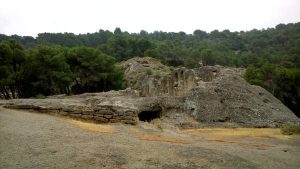 Spain’s sixth largest city lies just an hour behind me and one of the area’s biggest tourist attractions, El Caminito del Rey, over the brow of the hill. But I’ve been driving for a while and not seen another car let alone another human. As I climb yet another sharp bend twisting upwards in a land of pine forests and weird ocre limestone formations I’m starting to feel more than a little skeptical that Bobastro actually exists.

This is a working visit: Bobastro forms part of my update of Malaga province for The Rough Guide to Andalucia. As soon as I read “amid some of the wildest scenery in the whole peninsula”, my interest was piqued. I’ll also admit I thought “in the peninsula?!” And mentally brought up a list of really wild places in Spain that were surely more remote than Bobastro. 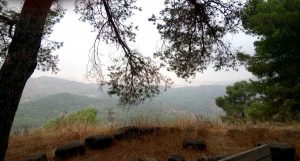 Just when I’m wondering whether to turn back I see the sign. I get out of the car to a silence so absolute it’s almost deafening. Pine forests clad the mountains as far as the eye can see – and we’re high up so that’s a long way. A few eagles flying overhead but apart from me and my car, nothing. Yep, this is truly wild.

There’s a sort of lean-to acting as a visitor reception almost as an after-thought. I coax Jesús, the guide from his book, pay my €3 and we cross the road to an iron gate. Up a few steps carved into the rock and we enter possibly one of the most extraordinary places I’ve ever been to.

The Kingdom of Ibn Hafsun

As we make our way through the pines, my guide sets the scene. We rewind to 9th century Andalucia to a time of caliphates, conquests and religious rivalry. What I’m about to see was the work of Ibn Hafsun, a Robin Hood type figure and fearsome warrior.

Except Malaga’s bandido wasn’t confined to a forest the size of Sherwood. At the height of his power, Hafsun controlled an area of Andalucia that stretched as far as Jaén in the north and Gibraltar in the south. And all from this remote spot in the deepest Malaga countryside. 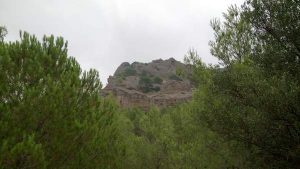 Hafsun, of Arab and Christian descent, fell out with the ruling Umayyad caliphate in Cordoba early on. After murdering a man, he set off on a life as a bandit, helping the poor and recruiting followers against the Umayyad regime.

My guide claims he needed somewhere secret to hide, away from prying eyes and preferably in the middle of nowhere. Hafsun chose Bobastro, which over 1,130 years later, continues to tick those two boxes big time.

An impressive amount of the Mozarabic fortified settlement remains today. You can see bits of the walls that once encircled it and the guide points out living quarters in the limestone caves. I’ll be honest and say that I had to use my imagination a bit to ‘see’ the houses, but once you turn the corner you no longer need any imagination. 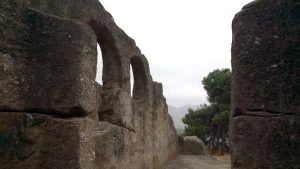 The most striking part of Bobastro is the church, built in 899 when Hafsun converted to Christianity. The transept and chapel, complete with Moorish horseshoe arches, are clearly visible. Damage – natural and human – had paid its toll. A large hole in the transept shows the latest ravages – treasure hunters put explosives under the altar in an attempt to unearth Hafsun’s hidden gold. But for a monument right off the beaten track in Malaga Bobastro is impressively well preserved.

Jesús regales me with a few more lurid paragraphs about Bobastro’s founder. As it turns out, Hafsun lived a more than colourful life and death too. He was buried in his church, but when the Umayyads finally took control of Bobastro in 927, they exhumed the body and had it placed on a stake outside the Alcázar in Córdoba for all to view (and spit on). 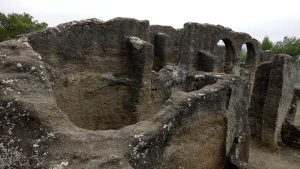 Jesús then leaves me – it’s apparently time for the next guided tour to start – and I’m alone in the middle of nowhere and the absolute stillness. I’m struck by the position. Hafsun certainly picked his spot and although he obviously based his choice on defence, the 21st century visitor gets all the benefits. The views are magnificent and stretch for miles and miles. And in all four directions. If you wanted to get away from everything and everyone, Bobastro is where it’s at. 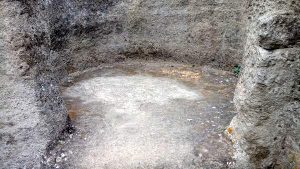 I make my way back to the road and the lean-to. Jesús is back at his book and there’s no sign of anyone else. Does he get many visitors? I ask. Jesús pauses for a bit and then remembers a German family who appeared a few days before. That would make 5 of us in a week in July, very high season just down on the road on the Costa del Sol.

Getting there: Bobastro is located near the reservoirs at Ardales to the north of Malaga. Follow signs to El Caminito del Rey and then to Bobastro. It looks like you’ll never get there, but persevere because you do eventually.